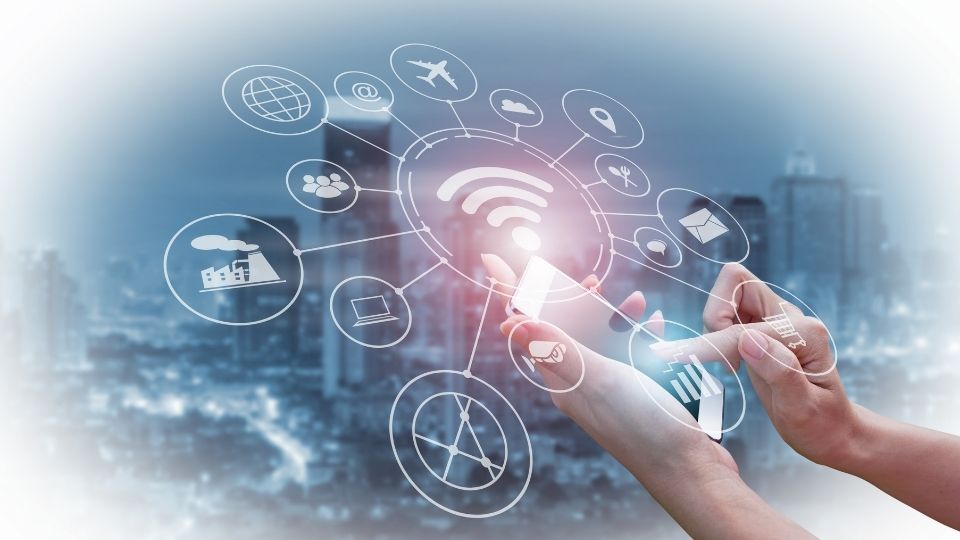 Digitalisation is the combination of digital technologies and data in the economy and society. The digital transformation affects all aspects of people’s lives and has consequences for the future. Digital innovations and technical developments have significant impact on almost all areas of the economy.
Digitalisation represents a huge opportunity and challenge for the countries. It is changing the areas of work, business and value as well as innovations and market structures.
The COVID 19 pandemic has caused a massive shift in digital habits across Central and Eastern Europe (CEE). At the peak of the pandemic, there were almost 12 million new users of online services in the region – more than the population of Slovakia, Croatia, and Slovenia combined. Many people have started using online channels for services for the first time. This is clear evidence that the changes caused by the pandemic are structural and will definitely stay.

IMPORTANCE OF DIGITALISATION IN CEE REGION

Digitalisation has been announced as “the next step of growth” for the economies of CEE regions and the idea that digitalisation can change its economic model has never been more relevant than amid the current coronavirus pandemic.
Even though there is a general agreement on the digital potential of the CEE region, it is not yet clear enough how Central and Eastern Europe countries can best move forward with digital transformation to receive benefits and become leaders in its future track.
Digital-oriented firms usually tend to have better productivity, are more innovative, grow faster and create higher paid jobs than non-digital. There is a lot of small companies in Central and Eastern Europe that do not invest in digital technologies. These firms have labour market and business regulations, the lack of external funding as major barriers to such investment and it may further intensify their delay in digital adoption.
It is proven by multiple studies that digitalisation leads to better firm performance:

Poland has one of the most advanced economies in CEE region, and it should take the advantage of the digital revolution.
The good news for Poland is that, in Europe and globally, this revolution is only starting, and Poland is well positioned to plainly benefit from it. Based on the size and quality of its talent pool of IT specialists combined with affordability of highly educated and digitally enabled professionals, Poland can create an advanced and digital economy.
To get there, Poland needs to digitalise the core of the economy. Companies in utilities, transportation, manufacturing, and other sectors should accelerate their digital transformations in order to catch up with the Western European benchmark in terms of productivity and advancement. At the same time, local retail and financial services are already at the forefront of the digital revolution and should continue their efforts in this direction.
This requires urgent action on both the company and the country level. Poland needs a concerted nationwide effort, with the joint participation of the key stakeholders: business, government and educational institutions. Poles have a historical opportunity to use the full potential of the digital revolution to transform their economy and realize the country’s ambition to be in the economic premier league.

As well as the rest of the world, the Czech Republic is running a digital transformation. Companies in various industry sectors digitalise their systems at a different pace based on their own goals for digital adoption. Achieving a quick digital transformation of economy will allow the Czech Republic to increase the productivity and accelerate the growth. However, the responsibility for digitalisation should lie on all stakeholders, not only businesses. All, including policy makers and citizens, should do their part to fasten transformation and ensure that it works for all of them.
Digital technologies are changing every aspect of life in the Czech Republic, and their continuous spread is accelerating. We are facing their effects in everyday lives. Some sectors are digitalising very fast, while others are still far behind. Inexorably, it is integrating the Czech economy closer into the global economy, bringing with it considerable opportunities, but also new threats. Digitalisation offers a way to fasten Czech productivity and growth to become on one level with the West.
However, to obtain the benefits digitalisation requires an effort from the companies, policy makers and, of course, individuals. Everyone needs to find new ways of doing things, to gain new skills and capabilities, and to accept the coming change.

Hungary is a Digital Challenger for Western countries in terms of economy digitalisation. It demonstrates a strong capacity in the digital economy, competing with such advanced European countries as Belgium, Denmark, Estonia, Finland, Ireland, Luxembourg, the Netherlands, Norway and Sweden.
The Hungarian government has recently agreed several programs to help small and medium-sized enterprises to improve their skills in innovations and apply Industry 4.0 technologies. This project provides experience and knowledge support to increase productivity and competitiveness of micro, small and medium-sized enterprises in terms of advanced technologies. Furthermore, the Digital Welfare Financial Program was launched to develop digital infrastructure and digital competencies within small and medium-sized enterprises.

Digitalisation is the integration of the technologies into people’s work and life. We believe that every business in the Baltics region can use disruption in order to improve their competitive edge.
The digital economy is a rapidly developing model of the economy that is based on the satisfaction of various needs of society and organisations as well as creation of added value by using digital technologies.
The advantages of this economic model are revealed through three mechanisms: inclusive, efficient and innovative. The inclusive mechanism is displayed through a creation of new jobs, a wider commerce market and the inclusion of society into the governance of the state.
The effective mechanism is shown through the increase in labour productivity, better capital management and the increased public sector capacity, whereas the innovative mechanism increases the satisfaction of the customers, competition amongst organisations and improves the state’s communication with society.
However, it is necessary to assess and manage the risks of this economic model, that is, the concentration that requires regulation, the inequality that needs to increase the level of society’s digital literacy and control that is diminished by accountability.
By assessing the Baltic States according to their digital progress in the context of the whole European Union, the highest rating from all three Baltic States is obtained by Estonia; it is the 9th among all the EU countries.
Lithuania takes the 13th place, whereas Latvia – the 20th. By comparing it with the average of the European Union, the digitalisation rate of Estonia and Lithuania is higher, whilst that of Latvia is lower than the average of the European Union.
By analysing the Baltic States, it can be concluded that all three countries are advanced in the dimensions of Connectivity, Use of Internet and Digital Public Services. Estonia and Latvia should promote progress in the dimension of the Integration of Digital Technology by encouraging the level of digital technology inclusion in businesses and by expanding the usage of the eCommerce channel in the country.
Latvia, as well as Lithuania, should focus on the strengthening of the Human Capital dimension by increasing the number of regular Internet users and raising the level of computer literacy amongst their citizens. It can be stated that all the Baltic States do not fully use their digital technologies potential for the development of the economy.

Bulgaria launched several successful initiatives in several pioneering technologies. However, integration of digital technologies is uneven across regions, and small enterprises show a significant delay in the integration of digital technologies. Policies for the digitalisation of enterprises that support regional balance and on all small and medium-sized enterprises are crucial and should be further pursued.
During the year 2021, in reaction to the COVID-19 pandemic, the health sector was prioritised as the area for digitalisation. A project for a national health information system was launched to store health records, prescriptions and referrals. It also contains information about procedures and treatment of patients at hospitals. Other relevant projects include a project to digitalise the certification of medical expertise and a project to support the vaccination campaign using a register. Bulgaria was among the first EU countries to launch the EU digital green certificate for COVID vaccination.
Bulgaria shows a mixed picture on enterprises’ Integration of digital technology. The country is investing in research and digital infrastructure, but their impact would increase if more enterprises were encouraged to make use of them. In addition, intensive outreach about how the new infrastructure can help small and medium-sized enterprises digitalise and raise their skills level could have a positive impact. Use of artificial intelligence is more widespread than the EU average. On the other hand, most of small and medium-sized enterprises do not yet engage in e-commerce.

Romanian enterprises do not take full advantage of digital technologies (electronic information sharing, social media, big data and cloud), with the exception of AI. As for Digital public services, Romania ranks last for key indicators such as digital public services for citizens and for businesses, e-government users and pre-filled forms. Projects aiming to meet different digital priorities are included in the National investment and economic recovery plan launched by the Romanian Government in July 2020, with a budget of EUR 100mln from European Union and national funds, covering 2021-2030.
Digital projects in the program include:

The network infrastructure through the country is developing fast, and people are becoming more comfortable with new technologies. The number of people who use the Internet regularly, do the online shopping and make electronic payments is rapidly growing.

CEE countries offer a prospering environment for different tech companies. This region is often referred to as “the Silicon Valley of Europe”.

According to the recent report on VC in CEE prepared by Vestbee, the disclosed number of investments in the CEE region in 2021 reached over 1000 and exceeded 5.4 billion EUR. Compared to 2020 the total amount of investment doubled.
Poland, Estonia, Romania, and Lithuania were the most active countries in terms of the disclosed amount of funding secured by regional startups. Estonia was the leader (€1.2B), followed by Poland (€807) and Romania (€780M). The most popular industries in 2021 included Artificial Intelligence, Healthcare, Internet Services, E-commerce, Finance, Shared-services, Delivery, and Analytics.

To take the full advantage of the digitalisation Central and Eastern European countries shall ensure that their regulatory frameworks enable data-driven innovation, as well as investment in the development of the necessary professional skills. CEE region shall also focus on research, development and innovation, especially in the areas where facing global challenges to regain leadership on the digital global marketplace.