What are the alternatives for the EU to manufacturing in China?

Once during a conference of export club in Paris hold at the beginning of coronavirus epidemy in China, I heard a discussion between 2 members. One claimed that the EU should reduce its dependence on Chinese production while another said that it is difficult due to low production costs in China. Does the EU really have an alternative to manufacturing in China?

Will coronavirus epidemy slow down the EU delocalisation to China?

There is no doubt that China will be able to quickly recover its production capacities after the crisis. However, the epidemy might increase the tensions between China and the USA which will inevitably have an impact on the global supply chain.

The EU countries start wondering whether moving of a larger part of its manufacturing to China was a good idea. French Economy and Finance Minister Bruno Le Maire declared in the Financial Times that Europe can’t any longer “depend on Asia, on China, for goods that are strategic for us, whether in the aerospace or medical sectors or in other supply chains”. China is an active global geopolitical player with its own goals, so the EU’s high dependence on Chinese manufacturing might quickly become a threat for the EU national security.

What are the alternatives for the EU?

To find a new place for manufacturing and to secure the value chains, the EU companies shall consider multiple criteria:

The current disruptions in the global supply chains represent an opportunity for the emerging countries in the Eastern Europe which can meet most of the above-mentioned criteria.

Delocalisation to the Eastern Europe

The countries of the Eastern Europe can be an interesting alternative to Asia for manufacturing.

EU Members in the Eastern Europe

A lot of production was delocalised in the past 20 years to the Eastern European EU members like Poland, Romania, Hungary, Slovakia and Czech Republic. However, the life standards of these countries have risen in the recent years and they become less cost-competitive compared to China and other Asian countries. The Eastern European companies are sometimes looking to delocalise in Asia to optimise their manufacturing costs.

While thinking of delocalisation more and more EU companies start looking now beyond the EU borders at the countries of the former USSR: Russian Federation, Ukraine…

Russian Federation is the biggest European national consumer market of 145 mln people. The Russian government provides today multiple incentives for foreign investors and companies to localise the manufacturing inside the country. Besides Russia is the founder of the Eurasian Customs Union (Russia, Belarus, Kazakhstan, Armenia, Kyrgyzstan) which opens and access to the population of more than 180 mln people. Hence, placing the manufacturing facilities in this country can be interesting to facilitate an access to this huge market.

However, manufacturing in Russia to serve the EU local needs, does not seem to be an excellent option due to the following reasons:

That’s why you should ask yourself first where are your final customers? If you plan to establish the manufacturing facilities in Russia for the EU market it’s not the best option for the reasons mentioned here above, but if you target Russian local market, Eastern European and Asian markets it could be potentially a very interesting alternative. The companies like Volkswagen, Renault, Faurecia, Danone, Innothera…  are already doing it.

Ukraine is a large country with the population of 42 million people and strategic location between the EU on the west and Russia in the east. It has common boundaries with the EU members: Poland, Hungary, Romania and Slovakia.

This country seems to match the criteria the EU companies consider while delocalising its production capacities. Let us have a look in details.

The significant devaluation of Ukrainian national currency in 2014-2015 turned Ukraine into one of the most competitive low-cost production platforms globally as labour, raw materials, manufacturing assets and other production costs dropped significantly.

The most labour-intensive economic sectors like agribusiness, light manufacturing and small machinery-building enjoy an important cost-competitive advantage. As you can see on the table below labour costs in Ukrainian manufacturing are almost 2 times lower than in China.

Geographic proximity to the EU

The proximity of Ukraine to the key EU markets is one of the major advantages compared to Asian countries:

Hence the delivery time and logistics costs can be considerably reduced, and at the same time the flexibility of the supply chain significantly increased.

Ukraine has a developed infrastructure to sustain an export-oriented economy – close to 170000 km of roadways, 22000 km of railways, 13 seaports along mainland Ukraine and 19 passenger airports.

According to the Logistics Performance Index measuring the efficiency of trade logistics Ukraine is outperforming all the neighbouring non-EU countries.

The Ukrainian government announced major infrastructure modernisation efforts in the coming years and has adopted a new law on concessions facilitating the foreign investments in this sector.

Having the literacy rate of around 100%, Ukraine is the leading country in Europe in terms of engineering graduates. A lot of foreign companies working in this country note that local people are hardworking and innovative.

Culturally Ukrainians are closer to Europeans and Americans than Asians which also help to establish the fruitful collaboration.

Ukraine is today among TOP-4 countries in the world by the number of certified IT specialists (around 185 000 professionals). It creates additional advantages for foreign companies as they can combine the low-cost workforce and manufacturing assets with digital skills available in this country providing interesting opportunities in Industry 4.0. 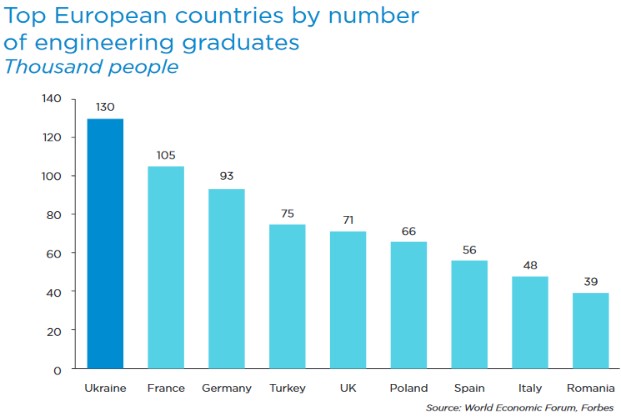 Besides the number of start-ups and venture investment is growing for the 4th year in a row and reached 510 M $ in 2019 which is one and a half times more than in 2018.

The implementation of the free trade agreement DCFTA with the EU since January 2016 facilitated the access to the EU market, by eliminating most of tariff and non-tariff barriers for Ukrainian export. One of the obligations taken by Ukraine under this agreement is the gradual harmonisation of products norms and standards with the EU regulation.

Reforms and transformation of Ukraine in recent years

After the Revolution of Dignity in 2014, Ukrainian Government launched and implemented more reforms than it did in its previous 23 years of independence. The key reforms were focused and achieved substantial progress in the following areas: anticorruption, decentralization, financial system sanitation, deregulation and energy independence.

As a result, the country managed to achieve the macroeconomic stability and the steady economic growth. Ukraine is now considered by foreign investors as stable and predictable emerging market.

Ukraine confirmed in the Constitution the “pro-western vector of development” with the aim to become the EU member. The EU has much higher political influence on the Ukrainian government and administration than it had 5 years ago.

There are multiple success stories of EU companies manufacturing in Ukraine. Few examples are provided further.

Automotive industry is a labour-intensive sector and several large manufacturing plants are located in the EU Eastern and Central European countries neighbouring to Ukraine. Hence, moving the manufacturing facilities to Ukraine and capitalize on lower labour and logistics costs seem to be a good idea. Besides Ukraine has a culture of automotive manufacturing with more than 60 thousand engineers employed in this industry. In the recent years more than 600 million USD were invested in Ukraine and more than 30 automotive components plants are currently operating in the country: Kostal Group, Aptiv, Leoni, Kromber & Schubert, Prettl group and many others.

Cloth, textile and footwear industry is also experiencing an impressive boom with a number of international brands opening their production facilities in Ukraine. Hugo Boss, Marks & Spencer, Tommy Hilfiger, Decathlon successfully operate and benefit of cost-effective manufacturing in this country.

According to the American Chamber of Commerce 2019 annual survey, 81% of its members in Ukraine saw increase in revenue and 82% plan to expand their business in the next years.

The recent EY research on the perspectives of investment in Russia showed that for the EU investors the proximity to the key EU markets is the main criteria for manufacturing outsourcing. All the non-EU countries of Eastern Europe have a great advantage over China on this point.

Locating the manufacturing capacities in Belarus or Russia shall be mainly considered to get an access to the huge Eurasian Customs Union market and less to supply the products to the European Union markets due to political reasons and trade barriers.

Ukraine seems to be an excellent compromise and alternative to Asian countries today for production outsourcing to cover the needs of the EU markets. The main advantages are: highly skilled workforce, lower labour and assets costs, developed (though obsolete) industrial base and infrastructure, geographic location, free trade agreement with the EU.

If you want to have more information about the Eastern European markets and opportunities, contact us.