Since joining the European Union in 2004, Poland has emerged as an undisputed economic partner. Its geographical location allows it to be a hub for trade flows on an Eurasian scale. The transport infrastructure, and in particular the road network, are major assets that the public authorities have managed to develop. Industry is a driving force in the Polish economy. It represents 28.9% of GDP in 2019. This is due to its very diversified character and the wide range of know-how it covers. This dynamic sector attracts mainly in the fields of automotive, aeronautics, chemicals and plastics, household appliances and electronics. Finally, Poland is also a large agricultural country with a diversity of production, 30% of which is destined for local markets. Poultry, pig and dairy farming in Poland is, however, very competitive on the European Union markets.

Polish economy is quite developed . According to the latest estimates of the European Commission, the growth rate in 2022 is expected to reach 5.2%. It also expects inflation to be lower in 2022, at 3.1%, than it was in 2021. These forecasts are likely to sustain this positive economic trend. They appear to be promising incentives to boost all the activities and industries. In this respect, the Doing Business indicator set up by the World Bank underlines the Polish performance in the field of entrepreneurship and business set up. 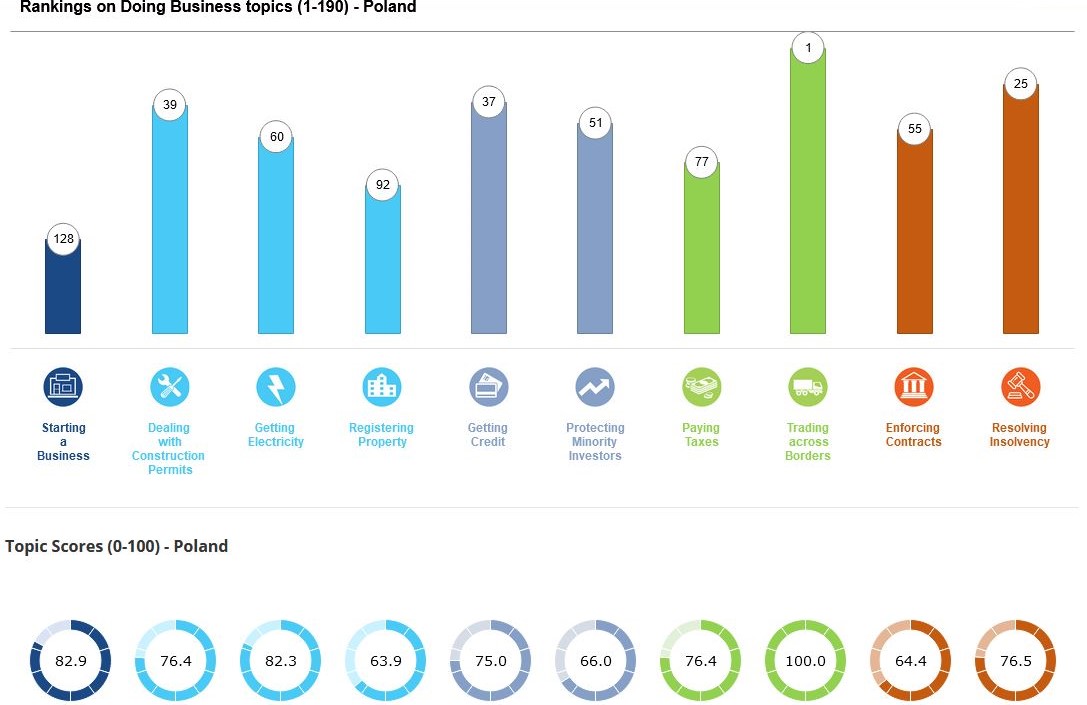 The Polish economy is a very open economy. Foreign direct investments represent  40% of Polish GDP in 2019. The majority of these investments came from Germany (19%), the United States and France (11%). For several years now, the government has been pursuing proactive policies to attract foreign investment. In addition to very advantageous tax incentives, Poland is famous for high-quality and not very expensive local labor. Indeed, while the average European hourly cost was €26.60, the Polish average did not reach €10 in 2018. Along with the attractiveness of the production channels, the markets are also very open. Poland ranks 21st among importers and 22nd among exporters out of 127 countries worldwide. Once again, Germany appears as a partner of choice, ahead of China and Italy.


French players are now the third largest foreign direct investors in Poland. This capital is estimated at more than 10 billion euros in 2017. According to the French-Polish Chamber, 1092 French companies are represented in Poland today. These companies bring the “French touch” to diversified business sectors. These are large firms, such as PSA, which has a commercial vehicle assembly plant in the south of the country, or the Guillin group, the European leader in eco-responsible food packaging, which has been based in Wroclaw since 2004, as well as Carrefour, the most successful French company in Poland. However, smaller French and European companies are also present on the Polish market, such as the Poujoulat group, which specializes in chimneys. It has a subsidiary in Warsaw from which it manufactures chimney flues and distributes them to several countries in the region. The German world leader in import-export of fruit and vegetables and foodstuffs, Binder International, has also established itself as a key partner in Poland. This trend is expected to increase in the coming months and years due to the aftermath of the pandemic. Several Western companies are gradually choosing to relocate part of their production to Eastern Europe.  Thus, according to the Polish Institute of Economics, Poland and other Eastern European countries should benefit from 22 billion dollars per year thanks to this trend.

In 2021 all Polish economic indicators are positive ; it is an encouraging sign for investments and production in the country. InterTrade, as a strategic consulting firm, assists companies seeking to work with Polish professionals or expand their activities in Poland. It provides precise expertise in various fields through its network of approved partners.